Start a Wiki
The Silfurbor Negla is a Supership existing only in the first Warship Gunner and Commander, in Warship Gunner 2 it was replaced with the Ragnarok.

The Silfurbor Negla is also the only ship in the first Game and one of the two in Commander to have a will of its own, how it attained Sentience though is unknown and never explained ingame, Although theories are thrown around at the End by the Narrator, ranging from it being "Evil Incarnate" or "The Offspring of some twisted War God" although this description is also given for the Druna Skass II, So it is minor theories at best.

The Silfurbor Negla appears on your second and further runthroughs as a new Final Boss, it appears literally out of nowhere with no warning or indication whatsoever after you sink the Druna Skass (Although during a second runthrough of the game More powerful versions of the Bosses you beat the first time appear... so you should have an idea this would happen)... its looks are the Same as the Druna Skass but it has better weapons and hull strength(300,000HP Twice that of Druna Skass's 150,000HP). 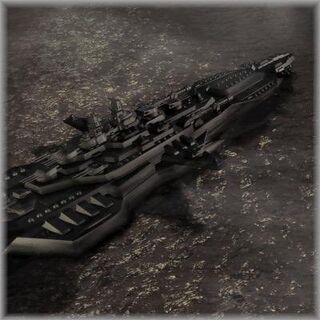 Its armaments are as follows in Commander:

Destroying this Supership is a Monumental task for ships without Wave Guns, but there are a few methods of cheesing this fight tremendously.

Method one: Massive Wave Gun. "The One Hit Kill Strategy"

with 999 Ammo and 32K attack power, this thing'll blow the Silfurbor Negla out of the water in one shot if aimed right.

*"Note: The Massive Wave Gun is only a One hit Kill if you hit the Silfurbor Negla right on the bow or stern either directly Horizontally or Vertically so the entire ship is caught in the Wave Gun's Blast (It HAS to pass over the Entire ship from Bow to Stern, or Stern to Bow if you shoot it from behind) or else it will survive with about 1/10th of its health left"

Two ways for going at this strategy: Either get an XBattlecarrier hull or the highest level of German Carrier, cram the biggest engines on it, shove 20 Halberd IVs in it, launch them as soon as the battle starts, then stay away from the Silfurbor Negla's front so it doesn't use that Siorc Wave Gun on you.

Downsides: EM Shielding on Silfurbor Negla means this'll take a LONG while, Halberd IVs are still at a (Small) risk of being shot down, Germany Only.

Get an Xbattlecarrier and the Massive Wave Gun, then put 20 Halber IVs in it, Impractical? Yep, utterly Awesome? Yep.

Tested in Normal. Use a Drillship Hull and load 50.8cm (20inch) guns in quad mounts on a drillship hull in three turrets, and mix it with heavy 41.0cm (16inch Naval guns), you would require a powerful Gravity shield, (VI or higher), use multiple 76mm rapid fire guns and 20mm CIWS. Stay behind the ship and keep its drill on the stern, you will probably run out of 50.8mm rounds by then, but keep determined until it is sunk.

Anyone is free to contribute their Strategies for sinking this Monster.

(*): The Asterisk before the Mission is there because this is the "Second Playthrough" Variant, one that only shows up once you've completed the Normal Campaign, Instead of Mission A-1 for example it'll show as mission *A-1 (The mission objectives are the exact same, but they've got different rewards and different (Read: Harder) and more Enemies show up), Mission *F-β (β as in: Beta) will only show up after Mission *F-α if you have beaten Mission *F-10 with an A or an S Rank (Not confirmed: But it may only count for the First Playthrough of Mission *F-10, and that replaying the mission if the A or S rank is not gotten the first time around will not unlock *F-β so for safety's sake, just make a save before attempting the Mission and reset the game if you do not get the A or S rank)

Retrieved from "https://naval-ops.fandom.com/wiki/Silfurbor_Negla?oldid=5541"
Community content is available under CC-BY-SA unless otherwise noted.